Us vs Them: The Mentality That’s Hurting Our Mental Health

Chances are that the answer to any of the above will be a resounding yes. Research by the Australian Institute of Health and Welfare indicates that nearly 1 in every 2 Australians will experience, or has experienced, a mental disorder at some point during their lifetime. That’s almost half our population. And that doesn’t account for the mental health problems that aren’t reported or recorded. Yet, the number of people who seek support for their mental health conditions is less than half. So what’s stopping people from accessing services and treatment for ill-health? Part of this is a lack of awareness or understating of what mental health actually is. The mentality that mental illness is something that affects other people, not us, also isn’t helping.

This ‘Us vs Them’ dichotomy is manifest, often unintentionally, in a variety of ways: ‘Mentally Ill vs Mentally Well’; ‘Weak vs Strong’; ‘Mental Health Professional vs Client’; ‘Normal vs Abnormal’… In actual fact, everyone has mental health, just like everyone has physical health. 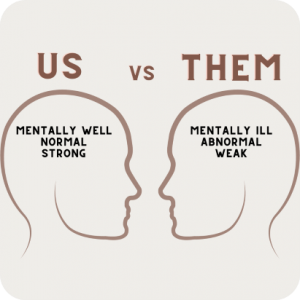 We all have emotions, feelings, thoughts, and moods that may influence our mental health, and that’s, well, perfectly normal. It’s true that not everyone will experience a mental illness, but everyone will go through periods where they struggle with their mental well-being, just as we have physical health issues from time to time.

It can be helpful to see mental health as something that exists on a continuum. It can change­—that is, move up and down the continuum—depending on different circumstances. The continuum goes from healthy, adaptive coping (green), through to mild and reversible distress or functional impairment (yellow), to more severe, persistent injury or impairment (orange), and finally to clinical illnesses and disorders requiring more concentrated medical care (red).

What the Mental Health Continuum tells us is that mental health is not all or nothing – there is a lot of ground between being healthy and being ill. And what’s important to keep in mind is that anyone can move along the scale to being injured and ill depending on their circumstances.

No one is immune to becoming ill and mental illnesses don’t discriminate, meaning there is no ‘Us vs Them’ when it comes to mental health issues.

The process of ‘othering’ people with a mental illness, stigmatising mental health conditions and categorising people into ‘mentally ill’ and ‘mentally well’ is dangerous. It means people may be less likely to seek help, downplay their experience or avoid speaking up—all of which perpetuates the stigma associated with mental health. 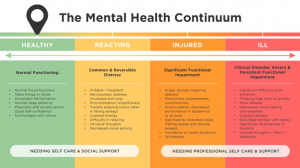 Despite many organisations now offering mental health support, we still hear that there are many barriers that cause employees to delay seeking help until crisis point is reached. A survey conducted by beyondblue and TNS Social Research found a there was a general reluctance among employees to disclose their experience of depression or anxiety to their employers. 35% of employees stated they would not want anyone to know. The top reasons for this? Stigma, fear of negative consequences (such as losing their job), and career damage. Almost half of these employees didn’t speak up due to a concern they would be judged or treated differently in the workplace. This is the fear of ‘othering’, of being differentiated as the mentally ill person and shunted into the ‘them’ category —let’s face it, no one wants to be the office outcast.

There’s much work to be done before we fully understand the breadth and scope of the prejudice that exists against people with mental illnesses, not least because people are often afraid to share their experiences! It’s well and truly time to challenge the stereotyping, stigma and discrimination that results from misconceptions about mental illness. Those with mental illnesses are often robbed of the opportunities which most of us would use to define a quality life: good, stable employment, safe housing, satisfactory health care and an affiliation with a diverse group of people.

We know too many people for whom this has been the reality­, and we’re going to introduce you to one of them. This is a true story about John, who started his first job as an apprentice carpenter at the age of 17. John loved the work itself, but the workplace culture he was part of caused him severe anxiety. His bosses would use offensive language towards him, make vulgar insinuations about his personal life and, occasionally, John would have liquid nails sprayed into his hair and face by fellow employees. John didn’t tell anyone, but he was on the verge of leaving because of this workplace bullying. For a long time, John was too afraid to open up about this treatment to the CEO, for fear that he might lose his job. Eventually, he became so distressed that he was afraid to go to work. He also began experiencing nightmares, insomnia, difficulty concentrating, depression, anxiety, and stress. John was eventually diagnosed with a psychological disorder which prevented him from being able to return to work with his employer. The bullying behaviour that John endured at work impacted his health and safety and resulted in psychological injury. When the CEO was made aware of this, they asked John why he had not spoken up earlier. John explained that he believed speaking up would escalate the problem or cause him to lose his job. He also stated that he knew nothing about mental health until he was suffering. John’s parents were furious and are now suing the company.

What happened to John could happen to anyone we know­—friends, family, colleagues­— and even ourselves. Remember, we can go from being a green on the mental health continuum to reaching crisis point because of circumstances beyond our control. Imagine how you would feel if John was one of your family members­— a brother, son, uncle or partner. You’d want him to be supported, right?

When it comes to looking after mental health, there’s no ‘one size fits all’ solution for employees or employers.

In many workplaces, the default response when a worker becomes mentally unwell is to recommend an Employee Assistance Program (EAP). While options like EAPs are well-regarded, they’re not always practical due to the stigma that is associated with seeking help or being referred to a counsellor. What workplaces need to do is focus on is develop specific and tailored approaches which meet to distinct needs of the workplace demographic. This will look different for everyone­— and the more hands-on an organisation can be when it comes to supporting employee wellbeing, the better.