Destigmatising mental health in the workplace

In the well-known American TV show Criminal Minds, an overwhelming number of the villains and lawbreakers depicted are shown to be suffering from a mental illness or mental health disorder. These characters are the violent, delusional or dangerous criminals who give the show its name. This program is just one in an extensive and problematic history of media representations that stigmatise mental illnesses. In fact, name any of your favourite television shows or films and it’s probable that a mental illness will be portrayed in some form— most likely as a “bad” or “undesirable” character trait. What results is the formation of negative and discriminatory attitudes towards the mentally ill. That’s what stigma is and, unfortunately, it exists beyond the fantasy world of TV. For many people experiencing a mental illness, living with stigma is a reality. 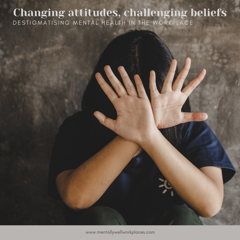 It probably comes as no surprise, then, that stigma affects a significant portion of the population living with a mental illness. Around 74%, according to a SANE report. The World Health Organisation defines stigma as “a major cause of discrimination and exclusion: it affects people‘s self-esteem, helps disrupt their family relationships and limits their ability to socialize and obtain housing and jobs.” When we refer to a person experiencing ‘stigma’ at work, we are talking about someone who may be treated differently by colleagues, may be the target of workplace harassment and may find themselves excluded from workplace activities or events. You might have noticed this happening to a colleague in your workplace. It might even be something that you’ve experienced yourself.

As a society, we’ve made progress in recent years when it comes to accepting that mental illness is just like any other medical illness or injury. Mental health no longer remains the taboo topic it has been in the past. Yet, mental health stigma still exists. Attitudes around mental illness, the language we use to talk about it and the way it is represented in news, popular culture or in the workplace all contribute to the continuing stigma.

People can hold stigma for various reasons. It may be due to a lack of information or education regarding mental health. They may have long-held ideas around mental illnesses and what it means to be mentally ill. When these go unchallenged, stigma is perpetuated. When a person who is experiencing a mental illness also experiences stigma because of it, the effects can be serious. The stereotypes, misconceptions and prejudices that exist around mental health impact people in different ways. Stigma can result in feelings of shame, isolation and self-doubt. People may be more reluctant to engage at work and may avoid interacting with colleagues or managers. They may feel reluctant to share their experiences for fear of judgement or job loss. In fact, research suggests that as many as 95% of employees who call in sick because of stress actually present their employer with a different reason for requesting time off.

Stigma is one of the chief factors that can prevent a person with a mental illness from seeking help or support. On a global level, over 70% of individuals with mental health disorders do not receive treatment from mental health professionals. Even in workplaces that encourage dialogue around mental health, stigma can become so deeply entrenched that it makes negative attitudes difficult to shift. The positive news is that workplaces can help break this stigma by ensuring all staff members are trained, to some level, in mental health. Some studies indicate that destigmatizing mental health can result in an increased likelihood that those struggling will seek support. What studies also found was that improving knowledge and education about mental illnesses was equally important in encouraging help-seeking. It’s important to normalise mental illness and encourage a proper understanding of mental health— something that media and pop culture often get wrong­­—but something that’s possible in the workplace.

Smashing that stigma is, ultimately, going to help your workplace. Creating a workplace culture that actively destigmatises mental health not only shows support for workers, but also helps businesses thrive. Mental health disorders like depression and anxiety cost the global economy an estimated $1 trillion per year. When mental health is addressed—and honest, open dialogue is encouraged— employee engagement, motivation and job satisfaction increase.

5 ways to help smash the stigma in your workplace: